Grass in a Glass

On arrival at Warsaw’s Modlin Airport, we’re whisked off – 007-style – in a helicopter. Looking down at the 7,000-year-old Bialowieza Forest, which stretches as far as the eye can see, is awe-inspiring. Bialowieza straddles the border of Poland and Belarus, and is Europe’s largest surviving primeval forest. Over the years it’s been protected by Polish kings and Russian tsars, as their royal hunting grounds, and today is a Unesco World Heritage Site. I’m here to spend 24 hours in the region, getting up close and personal with the local.

Zubrówka (pronounced zoo-brov-ka) vodka. Though not as ancient as the forest, vodka made with bison grass has, nevertheless, been gulped and sipped for more than 600 years. Since 1965, the Zubrówka brand has continued this bison grass tradition.

The grass grows wild in Bialowieza and gives Zubrówka a unique sweet, grassy fragrance and a glimmer of green.

We had booked into the Best Western Hotel – a great base for exploring the forest. It’s perfect for pampering, with a pool, salt cave treatments, tennis courts and a pile-it-on Polish breakfast to set you up for a day of forest trekking. For a more romantic stay, there is the Carska Tsar Restaurant with rooms, located in a restored railway station that was originally built for Tsar Nicholas II in 1903. The luxury apartments in the recently converted water tower of the old railway station are Tolstoy-esque red velvet and ornately furnished. Eerily, they have even discovered they have a dining car that was designed by Porsche for Adolf Hitler.

We began our evening at Carska Tsar with a palate-cleansing Rasputin vodka cocktail with birch juice (not the sap, we were assured). Then we moved onto dinner and each dish was accompanied by vodka, which was served ice cold in thimble-sized glasses on delicate stems, with water in large wine glasses to keep us hydrated. Pre-Bialowieza, the thought of a 100% vodka-accompanied meal would have made me recoil in dread, but this is so smooth, with no burn in the throat, and has sweet grass and vanilla aromas. This was the beginning of a new trend for me. From now on, no more vodka and tonic with a bendy straw – straight up, ice cold and sipped slowly in miniature glasses.

We enjoyed our Polish feast under the watchful eyes of stuffed wild boar and deer. Brightly coloured salads, black rye bread, herring gleaming in linseed oil, wild venison carpaccio and roast fillet. The highlight of the menu was the wild mushrooms – Bialowieza has an estimated 3-4,000 species of fungi. I defy anyone to find more fragrant, intensely flavoured mushrooms than the Bialowieza ‘swamp’ and porcini mushrooms. Combined with the forest flavours of the local vodka, they are sublime. To end our feast, we chose forest berries and a delicious oatmeal dessert, matched with Zlota vodka. It’s infused with forest oak bark, making it amber gold and vanilla sweet as it glides over the tongue.

A tour through the trees

The forest is dark and magical, with 26 different species of tall and slender tree competing for sunlight. The ancient oaks are even given names. ‘Our trees talk to us,’ says our guide. ‘As the sap rises you can hear them whisper.’ The forest is also home to the last wild herd of European bison – Europe’s heaviest land mammal, weighing up to 1,000kg. You might also spot wolves, elks, deer, wild boar, and a solitary lynxin the protected bison grass. Tall, fragrant and green, it is named after the bison (zubr), that feed on it. Just 21 local families are licensed to hand-pick the grass, in keeping with a 500-year tradition that is thought to have been first recorded in the Polish Encyclopedia Of Medicine And Science in 1534.

The families then dry the grass in their lofts before shipping it to Polmos Bialystok Distillery, where state-of-the-art technology takes over and Zubrówka is made. I visited the distillery, but first had lunch in the forest – roasting pork sausages on the open fire and toasting the forest with… you guessed it. Polmos Bialystok Distillery makes the purest rye vodka, to which bison grass extracts are added. The finishing touch is a single blade of bison grass, carefully placed by hand into each finished bottle.

Twenty-four hours in one of the last European wildernesses was an amazing way to discover the history and production of this remarkable vodka. To your health – na zdrowie! 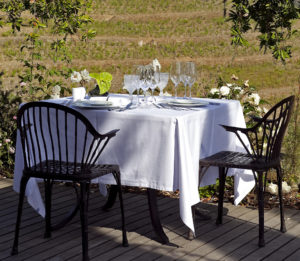 Gourmet on the go